Living in middle of a cornfield in west Michigan means that in the winter you have to deal with freezing temperatures, wind, and drifting snow. Last year which was pretty extraordinary had 6 foot banks along portions of the west side of the drive and 4 foot banks along the east. The wind would blow any loose snow into the valley between the two and just fill it up. I had to spend a couple hours clearing the drive any time we’d get even an inch or two as it would collect up to a foot or more of drifted in snow. To keep the wind off myself I had a vinyl cab which was considered a delicacy among the local field mice last summer. 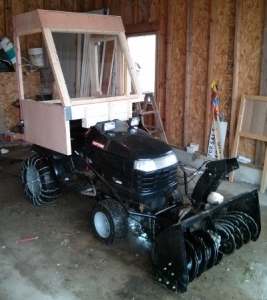 Upon returning home from hunting this fall to a foot of snow on the drive I hastily (4 hours) assembled the Tractor Cab Mark I with the idea that it would be sufficient. It featured a tilted windshield, short sides, a hinged door, and enough height to not quite clear the shed door when back in too quickly. As implied by the last “feature” after a particularly cold day as I was backing into the shed the top caught and basically crushed the cab shattering a couple pieces of plexiglass and destroying the hastily assembled joinery. Which isn’t really a shame since there was hardly a square joint on the whole thing. Additional flaws included the lack door not shutting properly since it was only framed on 2 1/2 sides. The sides were too short which meant there was little in the way of wind protection from inside the cab. The space above the snowblower controls were also too short, which meant smashing you hands when dropping the blower. And finally the back was completely open without any plexiglass.

Tractor Cab Mark II design took into account the shortcomings of the Mark I design. The Mark I was disassembled so I could reused some of the material, though in reality it turned out that just the original windshield, front mount, and hinges from the door turned out to be the only components which were really reused. Early in the new build I added another 2×4″ height on the front mount to allow better access to the snowblower controls. The entire front end then used a drop design to a much lower height from that front mount. This allowed better coverage from the wind and framing completely around the door, which added rigidity to the whole cab and kept the door frame square.

Rather than attempting to freehand the angled windshield again I kept that portion square. This simplified things for the cuts which I had basically freehanded on the Mark I. Hanging the door (not seen in the video because single digit temps chew through camera batteries way too fast) was done by measuring the inside door dimensions and undersizing the door by about 1/2″ vertically and a 1/4″ horizontally. This allowed me handle any sagging or flex of the frame when on the cab when mounted on the tractor which turned out quite successfully. I shimmed the door itself a 1/4″ when hanging the door and attaching the hinges.

Cutting the panels fairly straight forward (it helps when everything is square). I just laid out the cut lines after measuring and secured the fence with clamps at the correct distance. The 2x10s on top of the saw horses are a sacrificial table which can be cut into. I kept the blade depth shallow enough so that it doesn’t damage the strength of the 2x10s much at all. A marker is used to trace the shape of the opening. Then the plexiglass is cut the same way with the protective sheet of plastic still on so it doesn’t get scratched. Holes are pre-drilled so the when attaching the plexiglass to the cab it doesn’t shatter.

Manhandling the cab onto the tractor was a bit of a trick. The weight wasn’t so bad, but the bulk made it difficult to wrestle into place. The Mark I’s shorter sides allowed the cab to be held on with a ratchet strap, being hooked on the wheel wells of the tractor. With the lower sides to keep out the wind, the Mark II required a new solution. I added a couple eye-hooks inside the cab and used bungee cords to secure the cab to the tractor. Two along the back and two hooked to the front.

In the end the single drawback is that the Mark II design is a bit wider which means the I cannot get quite as close various objects like the trailer or a parked vehicle. Even taller snow banks will catch on the side of the tractor cab. For the purpose of keeping the wind and snow off of me while I am clearing the driveway, it works pretty well.

We are still adding items to the shop. Contact us if there is something you would like to see or custom make for you. Dismiss